Nin Andrews interviewed Joseph O. Legaspi on a range of subjects mentioned in his new book Threshold. The book is available right now in the CavanKerry Press book store. 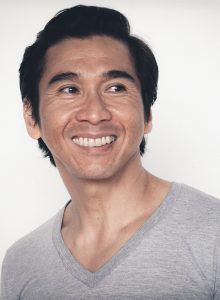 Read the full interview below.

Joseph O. Legaspi: I’d say react as you so inclined. I also find that particular revelation funny, yet beguiling, lonely, defiant. It was an instance in my feverish writing of the first draft of the poem in which I took pause, but the moment felt right to me. It’s a line against shame, really. The weightiest kind: filial, paternal. Growing up I had a fraught relationship with my father, that of awe, fear, and mystery. But then to adore his body, the masculine physique, to be drawn to it, threw me for a loop, adding a torturous dimension to desire.

Nin Andrews: I also love the poems about your mother. I feel as if I am watching her, like a regal presence, walking through some of the pages of this book. Was she an influence on your writing?

Joseph O. Legaspi: Yes, definitely. My mother looms large not only in my life but in my imagination. Such a mama’s boy. She was mythic to me, but through the years I chipped away at that, of course, as one should with one’s mother. To humanize her is to flesh myself out. But my mother will forever be muse to me, I cannot fathom not writing about her. Despite my many poems my mother remains a conundrum, a shape shifter, a foreign familiar.

Nin Andrews: Another poem I admired was “The Homosexual Book of Genesis.” I wondered if we might post it here?

The Homosexual Book of Genesis

It is a short book.

God in His righteous glory conjures up
everything: the separation of Light

and Dark, firmaments, land and sea,
vegetation and beasts. On the sixth day

God, in His image, creates Adam
and Adam, sons of His patriarchal regime.

Then God rests. Then no begetting.
No litanies of descendants. Hence,

The serpent remains, coiled up a fruitless
tree. But as God’s will, there calcified

in the larynxes of Adam and Adam: desire.

Nin Andrews: You grew up in the Philippines. What brought you to Los Angeles? How does being an immigrant affect your poetry?

Joseph O. Legaspi: I was born on November 26, 1971, and Ferdinand Marcos declared Martial Law in the Philippines on September 21, 1972. Martial Law was lifted in 1981, although Marcos was still in power. Benigno Aquino, the opposition leader who returned from exile, was assassinated in 1983, throwing the country deeper into chaos and unrest. My family managed to leave the Philippines on July 30, 1984 (I’m still unclear of the fine details), immigrating to Los Angeles to be with extended family. Being an immigrant is a foremost identity, the lens in which I view the world. I remain the other, foreign in this land where I’ve spent most of my adult life. In turn, I also am distant from my motherland since I am an American. This duality is the reality for immigrants, a vexing yet empowering statehood. You feel as if you stand on a perpetual threshold.

Nin Andrews: And your daily life as a poet? Do you compose on a schedule or do you wait for inspiration to strike?

Joseph O. Legaspi: If you mean writing, then I am not an everyday poet. In my daily life I wear many hats, apart from my full-time administrative job. I’m unscheduled, which used to torture me. Philip Levine was my mentor and he wrote every morning before doing anything else. But Phil was a beast. I’m more of an amphibian that suspends its bodily (poetic) functions to survive, endure, and pass by the harsh seasons, extreme weather. I think it was a matter of knowing how I work and not to punish myself. I realized I’m not a disciplined writer. Nor do I wait for inspiration necessarily because I believe that writing is work. And I can’t work in the summer. I prefer the chillier months: fall and winter when I can hunker down and generate warmth. Come spring I start going stir crazy!

Nin Andrews: I am always interested in titles. When and how did you know that Threshold was your title?

Joseph O. Legaspi: I submitted a manuscript with a different title to CavanKerry, and now, in retrospect, I submitted a different, unfocused book. I won’t betray the initial title because I believe it’ll be emblazoned on my third manuscript. In any case, my publisher, Joan Handler, was generous enough to give me permission and time to revise. The title Threshold didn’t arrive until my second go-around of my (dramatically) altered manuscript—after generous, keen-eyed feedback from my trusted friends. I began to see certain imagery and themes emerging: of passageways and cusps of changes. The wedding and marriage poems. The weaving of the genders. The entering and leaving. I see plenty of doors in these poems.

Nin Andrews: I read somewhere that you are an activist as well and that you started an organization to serve Asian American poets?

Joseph O. Legaspi: Yes, I cofounded Kundiman, a nonprofit organization that nurtures generations of Asian American writers and readers. At the heart of our mission is the annual writing retreat at Fordham University, Rose Hill, and we’re already assembling our 14th summer workshop. Furthermore, Kundiman co-sponsors a book prize with Tupelo Press, produces oral history projects, and offers national readings and workshops. For more information, just log on to www.kundiman.org.

Nin Andrews: I’d love to close with a poem of your choice from this wonderful collection.

Joseph O. Legaspi: This is one of my favorite poems from Threshold. And it looks so different from when I first wrote the poem. It was a page-long narrative piece, and I, for months, just kept compressing and compressing it. Like a diamond? And to get to that ending was shattering.

in their miseries. This town,
wrecked, solemn, can be named

Longing dreams of honey-buttered
milled bread of a conjured city.

You, familiar with hunger, Come here.
You, with feral memories of wood

and stove and bed, on your leaving,
exhale the poetry of an immigrant

mother, the loneliest of beings.