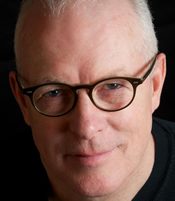 CavanKerry Press author Kevin Carey will be reading for The Poetry Society hosted at Gibson’s Bookstore.

Kevin Carey is an Assistant Professor in the English Department at Salem State University. He has published three books – a chapbook of fiction, The Beach People from Red Bird Chapbooks (2014) and two books of poetry from Cavankerry Press, The One Fifteen to Penn Station (2012) and Jesus Was a Homeboy (2016) which was recently selected as an Honor Book for the 2017 Paterson Literary Prize. Two poems from this collection have been featured on The Writer’s Almanac. His one act plays have been staged at The New Works Festival and The New Hampshire Theater Project. Kevin is a past winner of the “Best Screenplay” award at The New Hampshire Film Festival (2009) and is a documentary filmmaker. His latest project Unburying Malcolm Miller premiered at the Mass Poetry Festival on May 5th, 2017.