Admittedly, the temptation is there to leave off the Birth of a Press with a summation of our mission and description of our programs. It might seem then that our growth and development proceeded without a hitch, which is far from the truth. Though we have emerged satisfied and quite successful, we certainly have had our snags and roadblocks—even a few mild catastrophes (mild only in the sense that we would not be beaten by them).

Probably the most disastrous catastrophe occurred in 2002, when our distributor filed Chapter 11 and took our money and our inventory with them, but let’s back up for a minute. At CavanKerry’s inception, we had been of interest to both Consortium and University Press of New England. But after several meetings, both of them bowed out for fear that we would not be able to pull off what we proposed. I was never anything but completely honest about my lack of publishing experience, and since I had to find a distributor before I actually produced books and could build a track record, they were reluctant to take the chance.  At this point, we were close to print with Howard Levy’s book, and we were very concerned about not having a way to get the books out there. 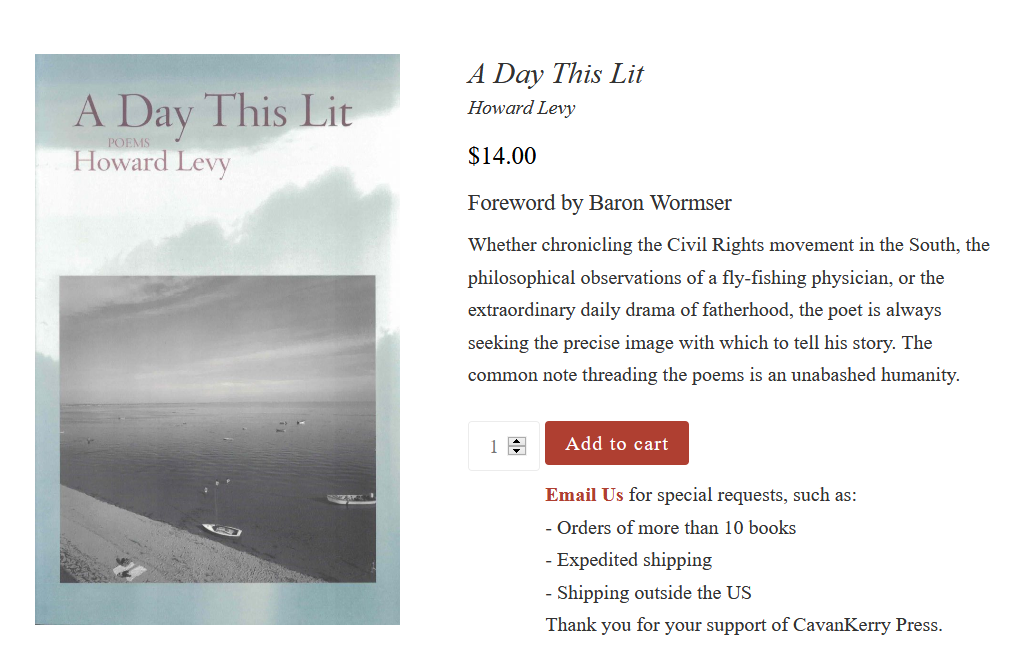 I spoke with a marketing expert who recommended that I contact a publishing consultant she knew who had worked for one of the large publishing houses as the company liaison with their distributors. He had subsequently left the corporate world to start his own consulting business and was available to search out a distributor for us; he found us LPC. They appeared to be an excellent choice because they were known for their interest in poetry, and in fact had represented it at many small press conferences. Soon after we signed on with them, our books were everywhere; sometime later we had a call from the Barnes and Noble corporate offices offering to do a special promotion of Breath of Parted Lips: Voices from the Robert Frost Place in over 600 of their stores during the Christmas season.

But that never panned out; the honeymoon was short-lived.  We could not reach the LPC sales representatives by phone, catalogs were not printed, and there were long gaps between payment checks. I was very wary and spoke repeatedly to our expensive consultant/liaison who tried to reassure me that LPC remained strong and healthy. I finally decided to bypass him and wrote to the LPC CEO stating that, as soon as our contract was up (which was a matter of weeks), I wanted to end our relationship. I requested the return of our inventory.  I heard nothing. Within a month, we received a letter from the bankruptcy court announcing their dissolution. The next several months were filled with costly communications with lawyers and pleas to the court to release our inventory. During this time, not only did we lose tens of thousands of dollars owed to us in sales, but we had no books to sell, so we couldn’t even find another distributor to represent us.  When we finally got our inventory back many months later, we signed on with Small Press Distribution and remained with them for several years.

I learned a great deal from that experience—firstly, that no one, specifically no distributor, would hold all of our inventory ever again; while it had been very seductive to have them house our books, relieving us of the responsibility and expense of storing them ourselves, it cost us dearly. Secondly, I committed to listening more to my own feelings and concerns early on. I had long been uncomfortable with the service we were getting from LPC (almost from the outset), and though I verbalized it to our staff and to our consultant, they cautioned me to be more patient and not jump the gun as I was often known to do. Though they were trying to protect the press and my name as an extension of CavanKerry, in retrospect, I wish I had jumped the gun and gotten out of the gate before our inventory was commandeered. I wonder if there is any such thing as jumping the gun when the business is yours and the buck stops with you? I think not.

A she lion, as are all creators of businesses, I knew intuitively when my baby was threatened, but I held back out of my concern that I not be too precipitous or rash. Rash?! What would have been so terrible?! I had a clause in my contract with LPC that I could also sell our books through SPD and SPD had accepted us. But we didn’t follow through; we didn’t think we needed two distributors. We were all hoping for the millions of sales we would make through our commercial distributor, so we were lulled into believing that things would improve. Alas, this was not the end of our distribution problems. 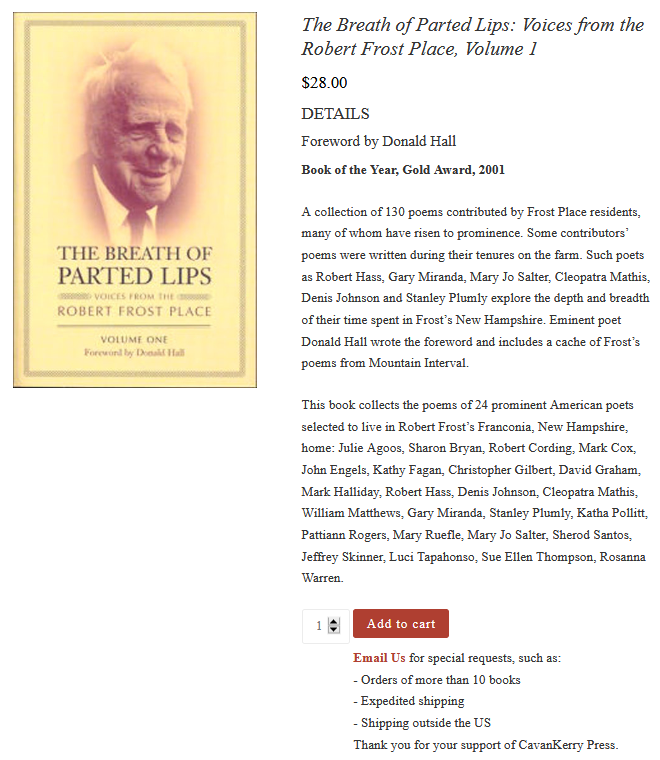 Though our relationship with Small Press Distribution was a very good one and their staff and service excellent, our book sales did not grow as we had hoped. After two years, it became abundantly clear that the only way to increase sales was with a sales force. SPD did not have one. A book wholesaler rather than a distributor, it relied on print catalogs and internet promotion. CKP already had a very liberal and generous advertising program in place whereby our books were well represented in the literary journals, Poets & Writers, and other trade magazines, but that was not enough. We needed sales people meeting in person with booksellers to draw attention to our books. Once again, our staff thought I should be patient. This time I was not.

In what felt like my endless search for a national distributor, I revisited Consortium but was turned down for the second time—this time because, though we proved we could do a great job of publishing poetry, all of their other presses were publishing poetry as well, and the market was glutted with it. Sales were very poor and they did not welcome another kid on the block. There weren’t enough sales to go around as it was.

In addition to several other national distributors, we also approached University Press of New England once again. They were going through their own growing pains and struggling with reduced sales of their own books and initially did not want to take on another press’ potential troubles. Relentless, I all but hounded them. Several good friends of CavanKerry— among them Syd Lea, Cleopatra Mathis, and Don Sheehan— approached them. We sent them our sales figures, our projections, our catalogs, our ads, our pleas. They finally agreed.  From the outset, our sales increased over 150%.

After many successful years with UPNE, we noticed a drop off in 2018 in their marketing efforts and sales results.  By summer, they announced that they would shutter operations at the end of the year.  By November, they were gone and, yet again, we were set adrift.  This time, at least, we had our books – our precious books.  Nonetheless, this kicked off several months of hunting and consulting with other presses experiencing the same limbo, before we came to rest with the University of Chicago Press.  We are grateful that, with their Chicago Distribution Center offering fulfilment and marketing support, we can return our full attention to the art of bookmaking.