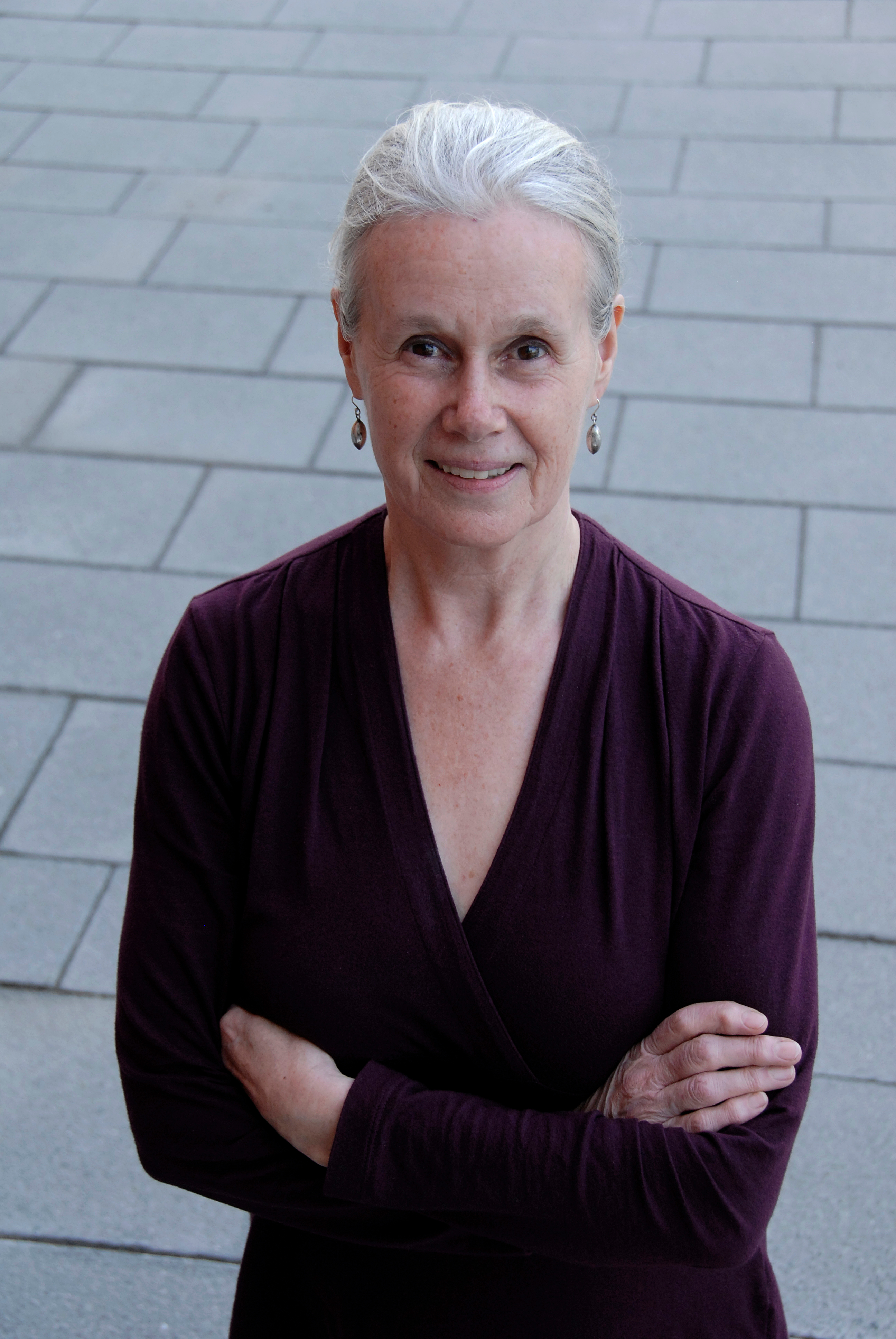 NIN ANDREWS
This is such a beautiful book (How They Fell).   I’m not sure how to begin, so I guess I’ll start with the beginning, or the opening poem, in which you say that you were born in one country but will die in another.  You were born in Scotland?  And the first section of the book, “all that green” are memories of Scotland?

ANNIE BOUTELLE
Yes, I was born in Aberfeldy, Scotland and grew up in Oban on the West Coast of Scotland.  I went to Oban High School and then to St. Andrews University.  I also spent some time in Vienna between high school and university (see the poem “Vienna, Spring, 1962”).  Yyes, many of the poems in the first section (“All That Green”) are about my growing up in Scotland, with some non-Scottish ones as well. In 1965 I came to the USA and have taught for almost 30 years at Smith College.   And yes, I will die in another country.  The experiences of each culture have contributed to my work.

NA
How has your Scottish heritage influenced your poetry?

AB
Scots, like the Irish, are a poetic race.  The soft colors, the hard edges, the diffidence of the people all contribute to my poetical thinking.  I was lucky to have some very great teachers, including the poet Iain Crichton Smith.  At St. Andrews, I was secretary of the Literary Society which hosted, among others, the poet Hugh MacDiarmid, a man about whom I later wrote my doctoral dissertation at NYU.  My very first publication was in “The Phoenix”, the poetry magazine at St. Andrews, in 1964.  Therefore, yes, Scotland and its poetry are in my genes.

NA
Is the status and role of a poet different in Scotland than it is in the U.S.?

AB
It may sound traitorous for a Scot, but I think that poets get more respect here in the USA.  They (some of them at least) certainly get more money.

NA
The middle section of the book, “passage,” takes on a mythic tone. I wonder if you could talk a little bit about the choice to write experience as myth?

AB
The middle section is certainly mythic.  Myths really are the experiences of mythic characters.  Writing in the mythic vein also allows the poet to take situations far beyond what would be permitted in reality writing.

NA
Are there specific religious influences in your poetry?

AB
Much of my poetry has a religious element, but not in any denominational sense.  The two “Thomas” poems are of course from that gospel, which is composed strictly of the sayings of Jesus, without unnecessary commentary.

NA
In the final section of the book, “seconds quicken,” you have wonderful poems about people, ranging from St. Thomas, Jesus, Mary MacDonald, the Monster of Florence, to the queen’s hairdresser.  In each there is a sense of illumination, even when you are writing about a mass murderer or a jihadist.  It’s almost as if a light shines off the pages. Is this how you actually see the world?

AB
I see the world as composed of many hues and shades of light.  But darkness provides a strong counterpoint to the light.  Every person, object, and happening in the world (or out of the world, for that matter) can serve as a source of illumination–even, as you say, a mass murderer or jihadist.  The poet Iain Crichton Smith, for example, can take a horrible situation (e.g. his poems “In Belfast” and “The Country of Pain”) and use it as a point of illumination.  This ability may be the poet’s strongest talent.

NA
I love the title poem, the final poem.  I wonder if you would post it here and maybe tell how this poem occurred to you?

AB
The poem “How They Fell” is about the events of 9/11/01 in New York City. I wrote it close to the time of the event, when images of those falling from the towers were still being broadcast. Like everyone else, I was shocked and horrified at these images and the only thing I could think of doing was to write about it.   Here it is:

One dove, as from a high
board, arms welded, an arrow

aimed at earth as if he thought
it water and he’d pass through.

A man and a woman held
hands, sweethearts in an alley,

until their grip frayed.  Blue
shirt of a child billowed

All the ties whipped upward.
A waiter’s apron broke loose,

its strings trailing behind.
An old man wrenched open

his mouth and tried to sing.
Someone clutched a broom.

Who covered her eyes?  Who
hummed?  Who held his head

as if hands protect?  Who stepped
off lightly?  Who clenched teeth?

Many wept, or cursed, or yelled,
or prayed, in many languages.

Some counted the seconds
as if they controlled something.

A toddler laughed.  No one fell
straight.  All of them tumbled.

NA
What is your writing process? How do you usually compose a poem?

AB
This often varies.  Sometimes it is immediate and quick.  At other times, it may take many days.  In many cases, I don’t so much write the poems, as become seized by them.  For example, in my first collection (“Becoming Bone”, 2005) I set out to write a novel about the 19th Century poet, artist and saloniste Celia Thaxter, who grew up on a desolate lighthouse island off the coast of Maine.  Instead of novelistic scenes, what came out was poems.  In the face of this strange phenomenon, I quickly abandoned the novel idea and started putting down the poems.

NA
What is the biggest challenge for you as a poet?

AB
My biggest challenge is finding the next poem.  It may come overnight or it may take weeks.  When it appears, I must scurry to get it down.

NA
What inspires you?  Who are your primary literary influences?

AB
I have mentioned Iain Crichton Smith, who had a huge influence on me.  Hugh MacDiarmid, whom I met while at St. Andrews, was also seminally important.  The visual arts are also inspiring to me, as in the example of the paintings of Caravaggio, which were the subject of my third volume (“This Caravaggio”, 2012).  I am always surprised by what inspires me:  I don’t know what it will be until it happens.  My surroundings also inspire me, particularly people, including my husband Will (who is also my amanuensis), students, friends.

NA
What are you currently working on?

AB
Right now, I am taking a rest, although the occasional poem still slips out.  When I am ready to really start again, I’m sure I will know it.

And how was it to be eighteen
and innocent as hell, and who
wasn’t disguised then, in the grey
medieval town, red gown wrapped
tight around each one. Flying
down Hepburn gardens on a bike,
shillings in the meter, sherry (dry)
with Kay McIver before Sunday
lunch. We didn’t have a clue—
babies spouting politics, downing
wine, sucking menthol cigarettes,
I tell you, we knew to pretend. And
how beautiful, like apples, we were,
polished, shining, intact still, skin
glistening, each heart beating out
its own fierce tattoo. Yet how ugly
when threatened. And how silly
to think the masks could hold.
But sweet—let’s not discount
the sweetness—one windblown
afternoon, Johnny and me
on top of Saint Rule’s tower, dark
beer, sharp cheese, pristine sky
above, tiny world at our feet
(buses, Market Street, graves,
cobbles), and nothing to stop us.

From How They Fell
By Annie Boutelle

And how was it to be eighteen
and innocent as hell, and who
wasn’t disguised then, in the grey
medieval town, red gown wrapped
tight around each one. Flying
down Hepburn gardens on a bike,
shillings in the meter, sherry (dry)
with Kay McIver before Sunday
lunch. We didn’t have a clue—
babies spouting politics, downing
wine, sucking menthol cigarettes,
I tell you, we knew to pretend. And
how beautiful, like apples, we were,
polished, shining, intact still, skin
glistening, each heart beating out
its own fierce tattoo. Yet how ugly
when threatened. And how silly
to think the masks could hold.
But sweet—let’s not discount
the sweetness—one windblown
afternoon, Johnny and me
on top of Saint Rule’s tower, dark
beer, sharp cheese, pristine sky
above, tiny world at our feet
(buses, Market Street, graves,
cobbles), and nothing to stop us.

From How They Fell
By Annie Boutelle 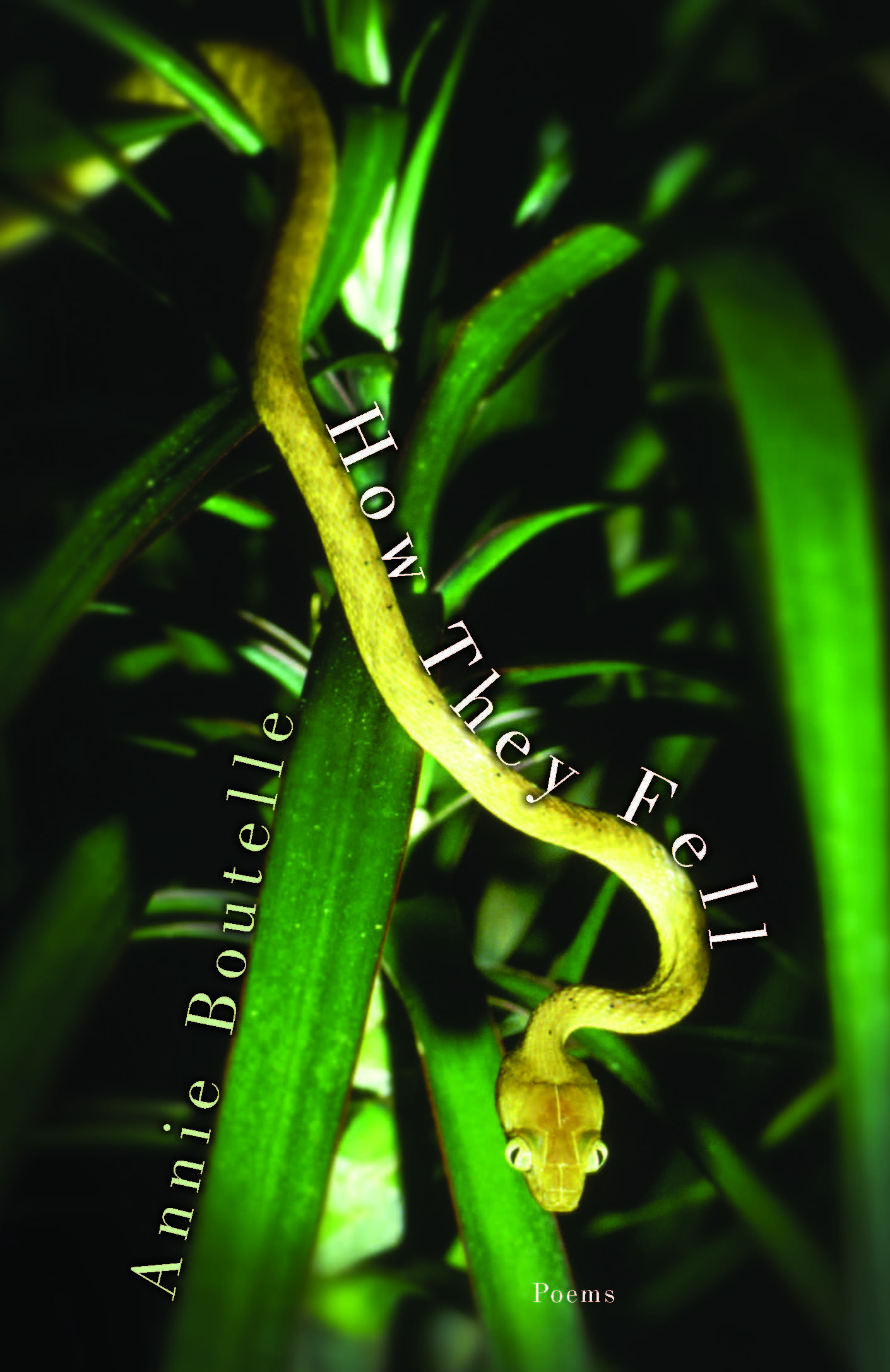 HOW THEY FELL (CavanKerry Press; October 2014; $16.00, paperback), Annie Boutelle’s third volume of poems, collects work that speaks to this acutely-attuned poet’s broad range of observations, perceptions, and literary styles. With poems rooted in both the real and the mythic, Boutelle taps her Scottish roots, hearkens to childhood and coming-of-age, and explores the often tenuous, sometimes dangerous interplay between woman and man. Her poems are steeped in allusions, but also peppered with whimsy and wit, as they ponder the everyday and the extraordinary.

The poet’s sense of duality takes precedence from the start:

Born in one country, I’ll die in another. And if
I dream, I’m where I was before I was: and if

I’m awake, I’m where I’ll be after I am; and hard
at times to tell which space.
(from “Country”)

Memories of a Scottish childhood unfold like photographs: a “father with the movie-star good looks,” a mother “fussing over bouquets for shut-ins,” and boys, “tall, loyal, clumsy,” the objects of jealous adolescent longing. Then come the inevitabilities: the end of innocence, the coming of love, of marriage, of life.

In the middle section of HOW THEY FELL, “Passage,” Boutelle reimagines the origin story of Adam and Eve after the Fall. In short, primal bites, these poems explores central questions of the birth of our race: “How could they know how far to the gate?” “How to see sky with so many leaves in the way?” “How to trust it was there?” These poems, sensuous, visceral, full of both fear and discovery, map the essential nature at the heart of the human experience, which is to say, the experience of being a man, a woman, a couple:

There is boundless wit woven through the lines of Boutelle’s verse. Eve discovers “Birds sang the same old songs./It annoyed her intensely.” In “Honey Blue,” a woman converses with her long ago removed uterus, which she encounters smoking a cigarette under a lamppost on Chestnut Street. There is a poem about the Pope’s toothpaste being FedExed to the Vatican from Germany, one about Queen Elizabeth’s hairdresser frustrated by the same old hairstyle, and another on the poet laureate losing his inspiration with “the sudden absence of pseudo-/ephedrine.”

Boutelle’s eye for the revelatory detail, her ear for a craggy consonance and airy assonance, and her mind with its well-honed intelligence, reveal and explore the self, in particular a self wrought from history, myth, and tradition,” said Eric Pankey of Nest of Thistles, winner of the Samuel French Morse Poetry Prize. With HOW THEY FELL, this gifted writer further illuminates her singular poetic vision.

Born and raised in Scotland, Annie Boutelle was educated at the University of Saint Andrews and New York University. She has recently retired from the English Department at Smith College, where she founded the Poetry Center and has served as the Grace Hazard Conkling Poet in Residence. Her work has appeared in various journals, including the Georgia Review, the Green Mountains Review, the Hudson Review, Nimrod, Poet Lore, and Poetry. She lives with her husband in western Massachusetts. For more information, visit annieboutelle.com.