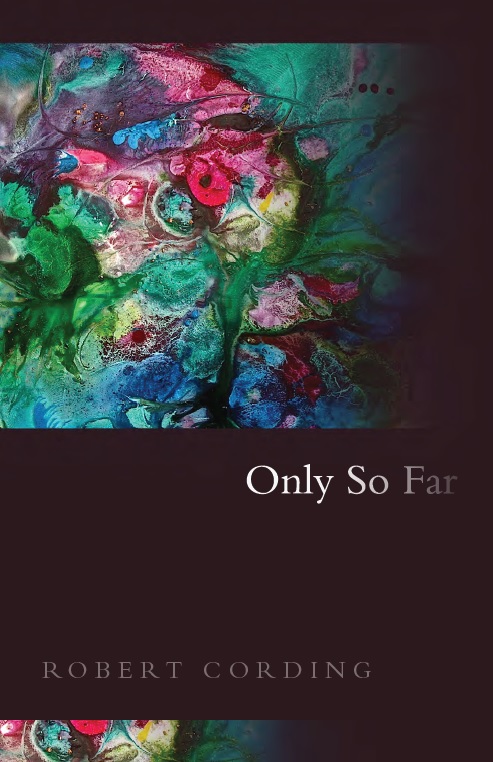 ONLY SO FAR (CavanKerry Press; October 2015; $16.00, paperback), the eighth collection of poems from Robert Cording, once more probes what Baron Wormser has identified in this poet’s work as “the rich borderland between spirit and religion.” In poems that find their poignancy and grace in the inevitability of loss, Cording seeks explanation and solace in the everyday miracles that both surround and sustain us. At once lyrical and uncompromising, these poems are about the humility of the human experience in the face of something greater that we can only try to understand.

Cording launches Only So Far with the reflective “Kafka’s Fence”:

In a drawing by Kafka, a man stands behind a fence,
looking out. He could easily step over
the fence—it is that low—yet we imagine him
pacing back and forth like a prisoner.

The man could have just come to this boundary,
or been here his entire life. Call him Moses, and call
the land on the other side of the fence, Canaan,
and it doesn’t matter how small the fence is, does it?

And you and I?—surely, we’ve spent a lifetime
arriving precisely at this fence. Haven’t we
always known we’d reach an end we couldn’t complete,
the promised land a step away, still unreachable?

This notion of reaching the Promised Land, of some paradise that may exist beyond our challenging lives, permeates the collection. A number of poems chronicle a father’s death, first the ignominy of the descent, then the passing—and later, a mother’s death, too. The memories of them survive in dreams, in nature, in their very absence. An inexplicable death, of a young nephew, prompts thoughts of the painter Constable, whose “canvases record what occurred/each day, as if there were nothing more/he could do” (“Reconfiguring”).

The natural world is never far in Cording’s work, and in Only So Far it once again illuminates our own, human, position in the greater scheme of things.  A sojourn in Florida opens new vistas, as the poet explores new terrain that proffers both revelations and recognition. Life—and poetry—is always about discovery for Cording, about elusive truths gleaned from the ordinary manifestations of the extraordinary:

The tide’s going out, and the sand,
washed clean, could be a Zen garden plot
ready to quiet all thought in silence.
The fisherman has broken down his rods
and carries them off now in an empty bucket,
happy enough, it seems, with his few hours
of meditative practice. I used to worry
about running out of words for things.
Now I worry I won’t use up all the words
I’ve been given. Here, in my ill-lit cabin,
shadows moving across the walls,
I live for that poem or two that seem
to gather from the world, or my mind,
or both, what they have to give.

Cording also shares a deep affinity with those who have come before, and his poems here are tied to Emerson and Thoreau, to Camus and Kafka, to Anne Ferry and Wallace Stevens—fellow seekers all, who “lived for that poem.” Often steeped in religion, Cording’s poems also spur philosophical ruminations from the Bible, from St. Augustine, and from the language of faith. In the final poem, “No-name Pond,” he writes, “I’m mostly a restorer, putting back/a few stones tumbled by time, /and thinking of the people who, like myself, /might have enjoyed an afternoon like this one—“

Robert Cording teaches English and creative writing at College of the Holy Cross where he is Professor of English and Barrett Professor of Creative Writing. He has published seven collections of poems: Life-list (Ohio State University Press/Journal award, l987); What Binds Us To This World (Copper Beech Press, 1991); Heavy Grace (Alice James, l996); Against Consolation (CavanKerry, 2002); Common Life (CavanKerry, 2006); Walking With Ruskin (CavanKerry, 2010); and A Word in My Mouth: Selected Spiritual Poems (Wipf and Stock, 2013).