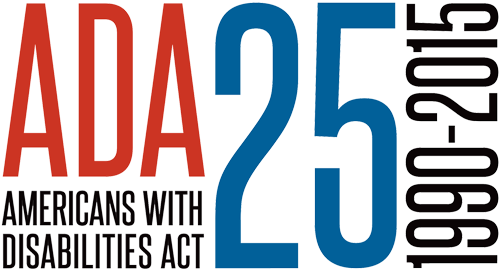 Happy 25th Birthday to the Americans with Disabilities Act, which was signed into law on July 26, 1990!

Today I have the pleasure of kicking off the second annual “October is ADA Awareness Month” on our social media outlets.  First a confession: while on a national level the focus of this month is disability employment awareness, CKP will be making “artists” the focus.  In the upcoming weeks we will be posting a cornucopia of stories, interviews, resources and educational materials.

But, in honor of this significant milestone in the life of the ADA, let’s start with the basics.

The Americans with Disabilities Act (ADA) was signed into law on July 26, 1990, by President George H.W. Bush. The ADA is one of America’s most comprehensive pieces of civil rights legislation that prohibits discrimination and guarantees that people with disabilities have the same opportunities as everyone else to participate in the mainstream of American life — to enjoy employment opportunities, to purchase goods and services, and to participate in State and local government programs and services. Modeled after the Civil Rights Act of 1964, which prohibits discrimination on the basis of race, color, religion, sex, or national origin – and Section 504 of the Rehabilitation Act of 1973 — the ADA is an “equal opportunity” law for people with disabilities.

And what is the definition of “a disability”? Per the Americans with Disabilities Act of 1990, as amended:

As used in this chapter:

The term “disability” means, with respect to an individual

(A) a physical or mental impairment that substantially limits one or more major life activities of such individual;

(B) a record of such an impairment; or

(C) being regarded as having such an impairment (as described in paragraph (3)).

For purposes of paragraph (1), a major life activity also includes the operation of a major bodily function, including but not limited to, functions of the immune system, normal cell growth, digestive, bowel, bladder, neurological, brain, respiratory, circulatory, endocrine, and reproductive functions.

(3) Regarded as having such an impairment

(A) An individual meets the requirement of “being regarded as having such an impairment” if the individual establishes that he or she has been subjected to an action prohibited under this chapter because of an actual or perceived physical or mental impairment whether or not the impairment limits or is perceived to limit a major life activity.

(B) Paragraph (1)(C) shall not apply to impairments that are transitory and minor. A transitory impairment is an impairment with an actual or expected duration of 6 months or less.

(4) Rules of construction regarding the definition of disability

The definition of “disability” in paragraph (1) shall be construed in accordance with the following:

(A) The definition of disability in this chapter shall be construed in favor of broad coverage of individuals under this chapter, to the maximum extent permitted by the terms of this chapter.

(B) The term “substantially limits” shall be interpreted consistently with the findings and purposes of the ADA Amendments Act of 2008.

(D) An impairment that is episodic or in remission is a disability if it would substantially limit a major life activity when active.

(I) medication, medical supplies, equipment, or appliances, low-vision devices (which do not include ordinary eyeglasses or contact lenses), prosthetics including limbs and devices, hearing aids and cochlear implants or other implantable hearing devices, mobility devices, or oxygen therapy equipment and supplies;

(II) use of assistive technology;

(III) reasonable accommodations or auxiliary aids or services; or

(ii) The ameliorative effects of the mitigating measures of ordinary eyeglasses or contact lenses shall be considered in determining whether an impairment substantially limits a major life activity.

(iii) As used in this subparagraph

(I) the term “ordinary eyeglasses or contact lenses” means lenses that are intended to fully correct visual acuity or eliminate refractive error; and