From Nanny Paquereau
I learned to sew French seams—

seams that hide raw edges
within the seam itself.

Seams that won’t unravel,
that are neat,

even on the wrong side—
finished she’d say.

each one folded over twice—
making allowances she called it.

Hers were meticulous, unrivaled.
They could be counted on

to hold.  They never ripped or frayed.
Still, the marriage unraveled early.

She had to stitch shoes
at McElwin’s in Nashua

and raise a latch key kid.
When social security

could not sustain her
she came to live with us.

Garter stitch dishrags all she could manage
when senility set in.

From Nanny Paquereau
I learned to hide raw edges

within the seam itself
each one folded over twice—

making allowances she called it.
Even on the wrong side

I would not rip or fray.
I would be counted on

to hold. I would be neat,
meticulous, unrivaled.

Still, the marriage raveled
I had to stitch and stitch

I could not salvage us—
finished she’d say.

French Seams, which first appeared in The Journal and is included in the manuscript, Gloved Against Blood, which CavanKerry recently accepted for publication. 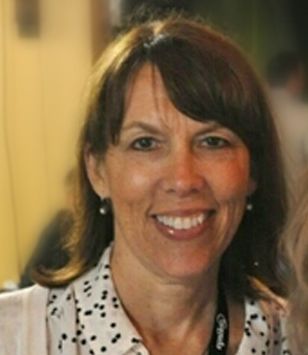 Cindy Veach’s debut poetry collection is forthcoming from CavanKerry Press. Her poems have appeared most recently inMichigan Quarterly Review, The Journal, Valparaiso Poetry Review, Poet Lore, North American Review, Chiron and The Human Journal. She was a finalist for the Ann Stanford Prize, and the recipient of honorable mentions in the Ratner-Ferber-Poet Lore Prize and Crab Creek Review Poetry Prize. She manages fundraising programs for nonprofit organizations and serves as a volunteer formasspoetry.org. She lives in Manchester, MA.