I wish I could bumble and buzz
transfer honey to the tongue
of the stranger gyrating his hips,
his drink in his hand,
and lick off the salt rim
encrusting his tongue stud

with the unsullied swagger
of honeybee daggers in captivity
for three thousand miles
when their crate doors swing open
on almond blossoms.

When I sashay up, he recognizes me
as if after 18 years, an event more momentous
than the honeybee release, because at that moment
someone bumps my elbow
and my drink spills and his drink spills
and as he reaches over
to help assemble
the ghostly broken vessels

his knuckles brush the crotch on my too tight jeans
I’d like to hurriedly remove.
Is it just the clinging material
or my soul cleaving
or the solely material
weave of airways
collapsing the dark caves
beneath my eyes?

My fingers let go
stinging with ardor
as if into the bower
of each open flower. 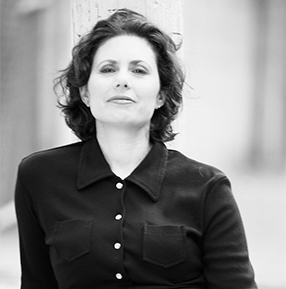 Harriet Levin was born in Philadelphia, Pennsylvania, to first-generation Eastern European Jewish immigrants. She received her BA in English and Russian at Temple University and her MFA from the University of Iowa, where she also translated works for writers in the International Writing Program.

She is the author of two books of poetry: Girl in Cap and Gown (Mammoth Books, 2010), which was a National Poetry Series finalist, and The Christmas Show (Beacon Press, 1997), which was chosen by Eavan Boland for the Barnard New Women Poets Prize. She is also co-editor of Creativity and Writing Pedagogy: Linking Creative Writers, Researchers and Teachers (Equinox Books, 2014). How Fast Can You Run, a novel based on the life of Lost Boy of Sudan Michael Majok Kuch, (Harvard Square Editions) is forthcoming October 28, 2016.