We sit in his van, art supplies
and partially scraped palettes
on the floor, my back pack
of poems next to me on the seat.
We drink coffee and tea
looking over the salt water river
behind Starbucks,
a seagull on a rotted raft,
a sailboat sitting on a mud bank.
He wants to know what’s fair
about how America has sold out
to Wall Street and made the middle class
foot the bonus bill. I tell him
nothing is fair, those are the rules.
I tell him I’ve surrendered.
The problem is too big I say
the monster too strong.
I think of it stomping tiny buildings,
villagers running for the hills.

He’s not satisfied with my answer
and I know why, the idea
of not setting it right makes no sense to him.
He wants what we all want – justice.
I sip some more tea,
look at the water, the way the dirty
river winds to nowhere,
to the promise of open ocean,
and I think the only way to beat them
is too live in spite of them.
I can help a kid to maybe write
a poem he didn’t know he had in him.
He can show that clumsy little girl
how to make a painting
that will change her life,
there’s real joy in that, I say.
The other universe operates on its own,
the rich live in a different climate,
all we can do is hope
they don’t notice us,
hope they read poetry,
hope they buy art,
hope someday it makes sense to them.

“Justice” is part of new book coming in October (Jesus Was a Homeboy, CavanKerry) and was previously published in the journal Juked . 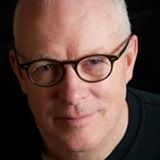 Kevin Carey teaches in the English Department at Salem State University. He writes poetry, fiction, plays, and the occasional film script. His work can be found in several literary journals, among them:  The Apple Valley Review,  The Literary Review, The Comstock Review, and The Paterson Literary Review. Kevin is currently at work on a documentary film about Salem poet Malcom Miller. His book of poetry, The One Fifteen to Penn Station, is available from CavanKerry Press.